Imran Perretta's Jerwood/FVU Awards commission film '15 days' focuses on the refugee crisis in Calais and Dunkirk. He explains how the film came about and how his move into art making was shaped by the 2008 financial crisis and an aborted career in architecture.

Imran Perretta originally trained as an architect before embarking on a fine art degree at the Slade. In the two years between finishing his first degree and starting his second, he worked in various jobs, including studio assistant to the artist Dryden Goodwin.

It was Goodwin who encouraged the 29-year-old’s experimentation in filmmaking, which last year saw Perretta receiving one of two Jerwood/FVU Awards, the other going to Maeve Brennan.

His specially commissioned film, 15 days, is currently showing at Jerwood Space, London alongside Brennan’s Listening in the Dark, in the exhibition ‘Jerwood/FVU Awards 2018: Unintended Consequences’. The films will then tour to other UK venues.

Perretta works primarily in film, performance, sound and the written word; his poetry accompanies and is often the starting point for his films. With his formative years shaped by the post-9/11 political landscape and its ‘War on Terror’ aftermath, and having grown up in London to a Bangladeshi mother and an Italian father, Perretta was acutely aware from an early age of the media portrayal of South Asian men.

His work is both a meditation on his own personal experiences as a second generation migrant, and the broader migrant and refugee experience. 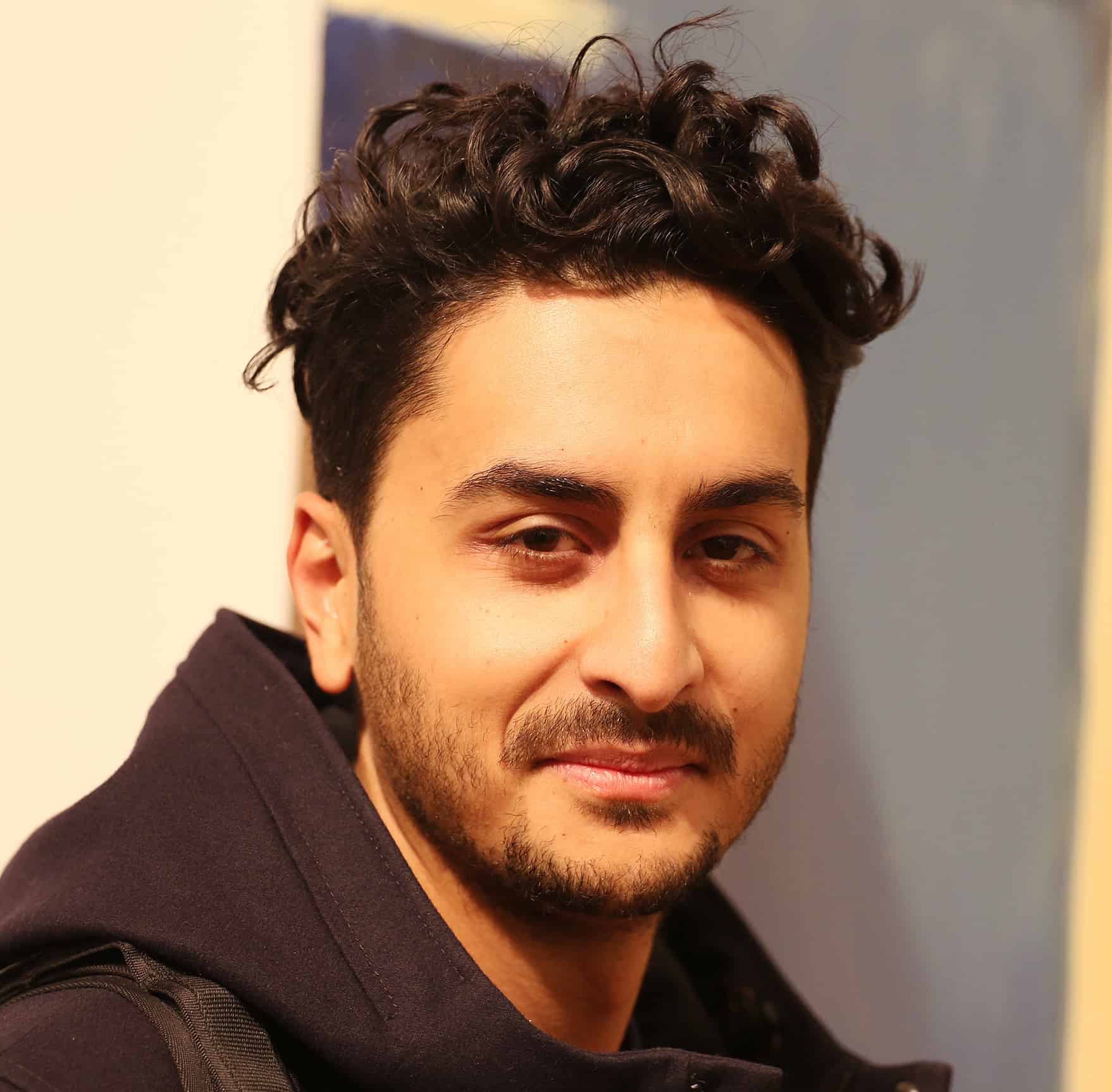 15 days is the eponymous character in your film about the refugee situation in Calais and Dunkirk. Is that a fictional character or an amalgam of people you met when you were filming?
It refers to one friend of mine. When I first met him, on my first day in the camp in Dunkirk, he called himself ’15 days’. Once I got to know him it became clear that he used that name because the last time the police had taken away his things was 15 days ago. It also spoke to his anxieties that I might potentially be an informant or in some way affiliated to the state, which reveals the atmosphere of fear and agitation within the camp that, in order to keep safe, you have to come up with an alias.

Did you go when the camps were dispersed?
Yes, this was the aftermath. The film was shot in September last year, so the Jungle had been demolished a long time ago. It was really a kind of eye-opening exploration of how people are living informally in the woods. Most of the footage that made it into the film was actually shot in Dunkirk and there’s people living in a park just by the motorway. It’s not a formalised camp, so everything that happens is in some sense irregular, and that includes the ways in which the space is policed. People have to improvise their shelter on a day-to-day basis, based on whether the police have pepper-sprayed their blankets or slashed their tents or bent their tent poles.

What was the impetus for going?
As someone who has had their own troubles passing through borders, I wanted to see for myself how people were navigating that coastline. I guess it was part of my broader research into the nation state, but more than anything I just wanted to be able to go there and hear people’s stories without having to be affiliated with an aid organisation, which has its own set of problems.

You say you’ve had your own border-crossing difficulties. Could you tell us something about that?
I guess it’s best explained in my last video work, Brother to Brother [2017]. It’s like a testimony for the time I was detained at Heathrow Airport. It tells the story in the form of a poem and images of me being detained under anti-terror laws and talks about getting strip searched.

You’ve said that you try to meditate upon a “complex narrative of loss and belonging”. Does that run as a thread throughout your work?
I think so. I think anyone from a marginal background is told that they have to assimilate. And there’s a sense of personal and cultural loss in the process of assimilation, because belonging is about negotiating the interstitial space between assimilating and being your authentic self. There’s a meta narrative about colonialism, about patterns of globalisation and mass migration that’s over 400 years old, and I think of the ‘migrant crisis’ as the so-called migrant crisis, because these movements of people have been happening for hundreds of years. 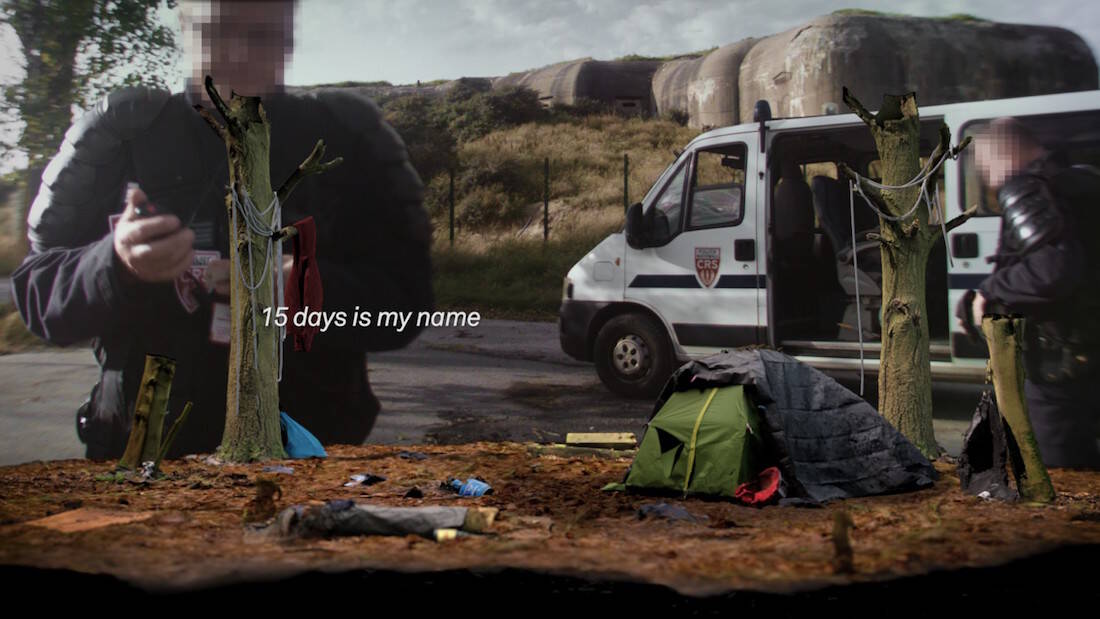 Are there any writers or historians of colonialism that you’ve found particularly influential?
Yes, loads really. I think Edward Said is a big one, with his ideas of the Western Gaze, especially where he writes that the Arab is always depicted in large groups, always devoid of individualism and agency. In relation to 15 days, I’ve taken on this idea of brownness and the Orient. The depiction of brownness is essentially devoid of humanity and the political imperative to conceptualise the brown body as deviant or a physical and ideological threat to the West. Lurking behind all this in my work is the threat of jihad. Also, there’s notions of Afro-pessimism, with their images of death and violence and their role in oppression. That’s formed my thinking when it comes to representing the body in pain and in trauma without actually having to show it.

You studied architecture before going to the Slade. When did you decide that architecture wasn’t for you?
While I was studying [at the Bartlett School of Architecture] the financial crash happened. My dad lost his job and around the same time my mum was diagnosed with cancer. I managed to get through my degree and get a job working on the HQ of an investment back in Asia. At this point my mum had passed away and my dad was still not working. I was having to design the toilets of this investment bank, which was the very institution that caused not only the global financial crisis but had put my family into a very desperate situation. I didn’t want to silently capitulate just for the sake of a profession I didn’t particularly believe in so I quit, pretty sharpish. After that I did lots of jobs. I worked briefly as a set designer, and then as an assistant to Es Devlin for about a year. I decided that wasn’t for me either. Eventually, through being an artist’s assistant [to Dryden Goodwin] I started making art.

Since I was a teenager I’d been making basketball films for my friends and little music videos. But Dryden was the one who encouraged me to start making film in a more experimental way. He showed me that there were many ways to be experimental and I already had some strings to my bow without realising it. It was just about channelling the things I’d been doing since I was about 13.